I did not see this coming. I’m an Evernote fiend, a superuser, an evangelizer. Or, I was until a few weeks ago when I came across Quiver. Quiver is a Mac note-taking app that includes two features I’ve been waiting for Evernote to integrate for years:

Yeah, that simple. And Quiver handles the basics of Evernote like a champ:

This feature alone was one I’ve been waiting for in Evernote for years and years. I’d worked out ways to make Evernote work for my purposes (indent code one level, use the copy-as-rtf Atom plugin, etc). Quiver tackles this natively by dividing up your note into what it calls “cells”. Your note could have one cell, or hundreds of cells, it’s up to you and what you need. Each cell has a format:

This is how you can write some text in one cell, create a new code cell then drop in some code, create a new text cell and continue writing text. 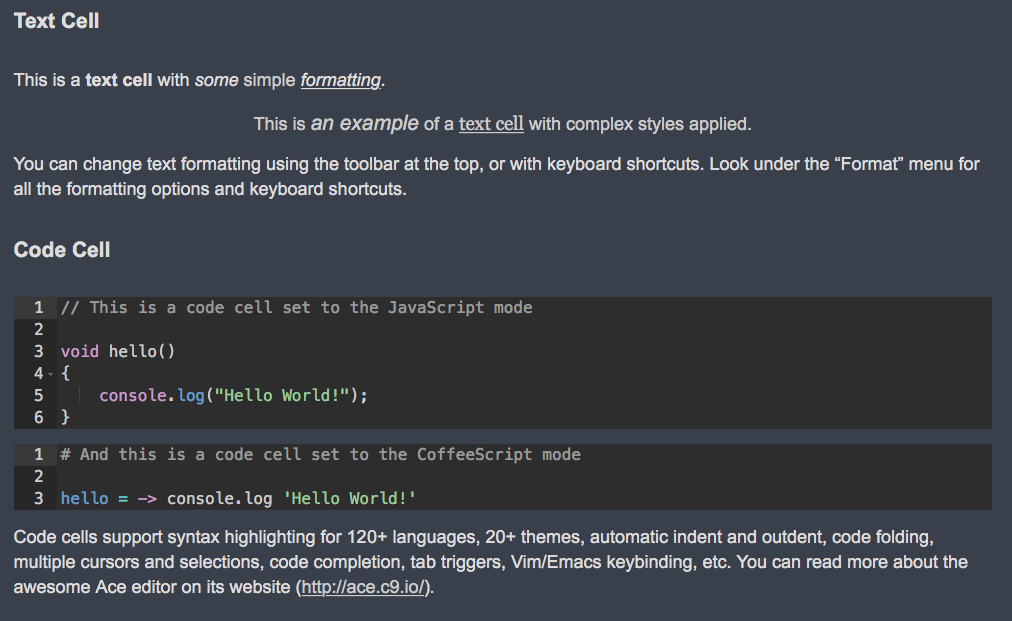 Each code cell can represent a different language, and display the syntax highlighting specific to that language. This feature is awesome as someone who finds necessity in writing daily dev diaries just for myself.

Just like code cells, Quiver supports markdown cells. When you preview your note (by putting it in preview mode, from edit mode) you’ll see your markdown rendered into HTML. Here’s an example of the Quiver window split in two. The left side is the “edit” view, and the right side is the “preview” view. You can choose which mode you are in, between “edit”, “preview” or a split with both “edit” and “preview” displayed at the same time. 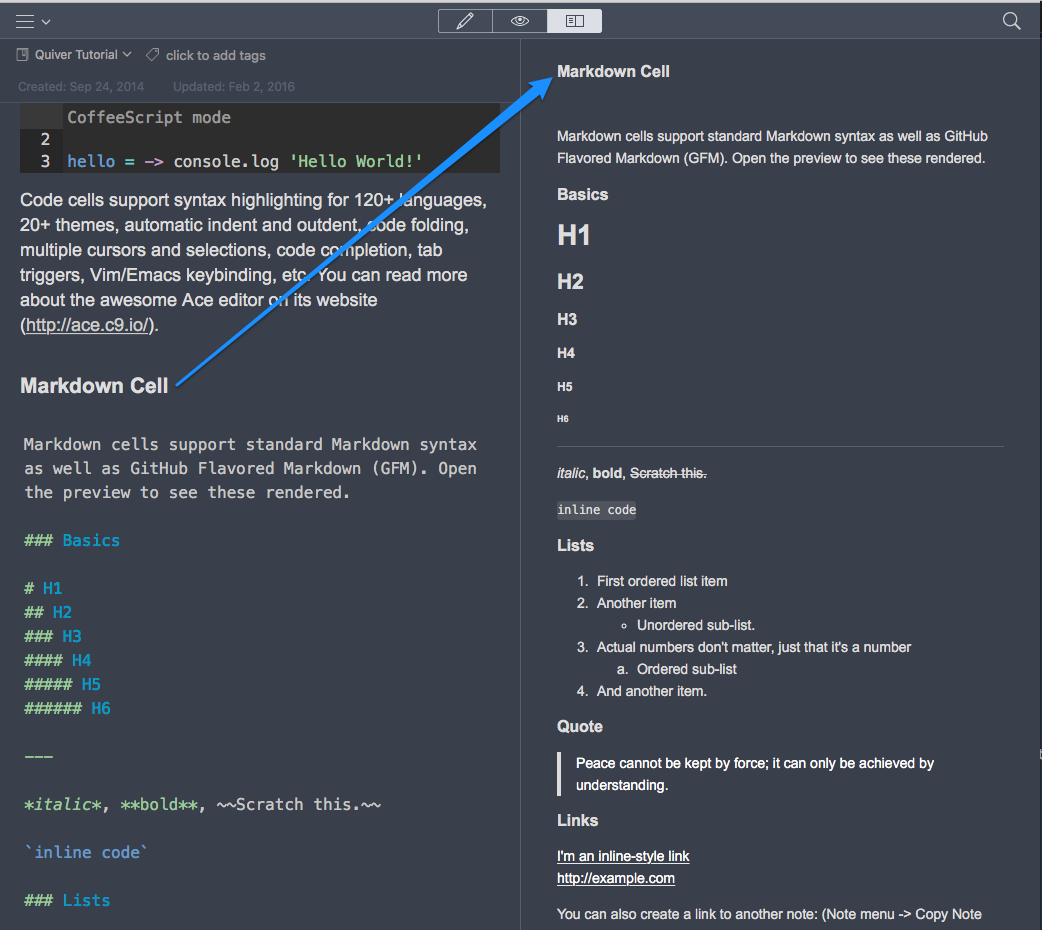 What does Quiver lack?

They are not a deal-breaker, but they would be quite handy to seamlessly replace my Evernote workflow. In the meantime I’m getting used to annotating my attachments a bit more with keywords so I can easily find the attachments later on. And as far as web clipping goes, you can get pretty far by copying and pasting an entire page’s content into Quiver, but you will most-likely have to do some cleanup around removing unwanted elements, and dealing with missing CSS info inside your note. You can also copy and paste just the text of a website into Quiver, and do your own formatting after the fact. Takes a bit longer, but the note looks a lot nicer when you can control everything yourself.

What else does Quiver offer?

You can create flow and sequence diagrams right inside your note! I didn’t realize how much I wanted this feature until I had it in front of me. 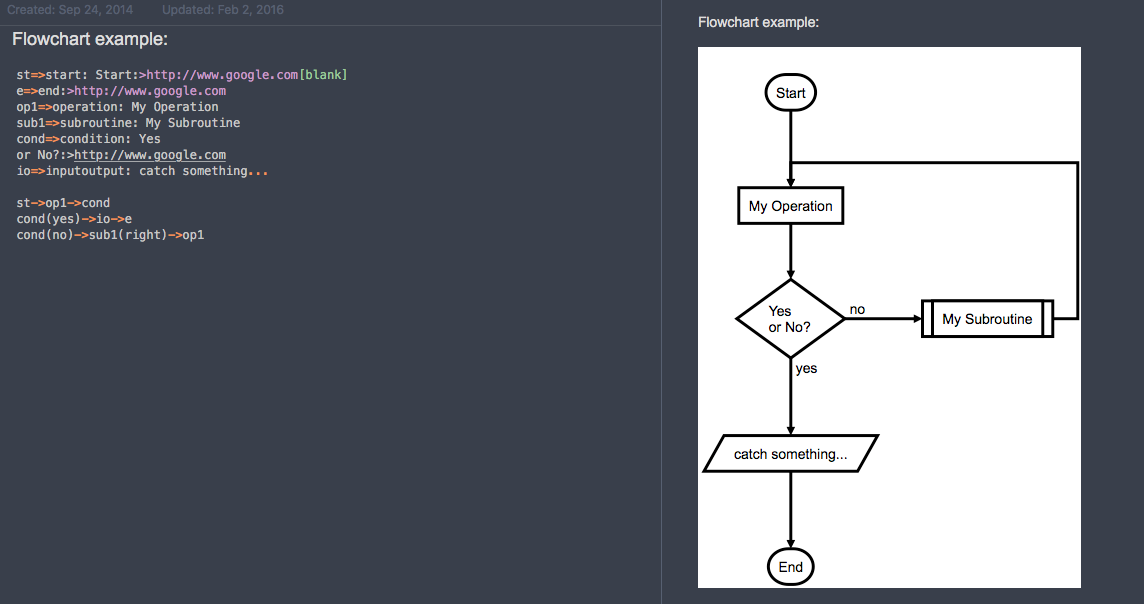 Within the first day or so of using Quiver, I’d created a half-dozen diagrams for myself, and one to help clarify the flow of a new feature we were writing. It got everyone involved on the same page by translating the text of the story to a visual representation of the flow. It was found to be very helpful, and I made a few Quiver converts along the way.

All of your notes are stored as JSON, not some proprietary or otherwise cumbersome format. It’s just JSON data.

As of version 3 of Quiver, you can now import your exported Evernote notes (*.enex) into Quiver, and it keeps your original dates, tags, and attachments. So nice!

As-is, Quiver accomplishes so much of what I loved about Evernote, and does more. If Quiver’s dev stopped supporting/upgrading Quiver right now, I’d be satisfied with the current feature set. But, I do not believe they are done improving the application yet, and I look forward to discovering more ways to love this app.